SHABANIE Mashava Mines (SMM) Holdings, once an asbestos empire, continues evicting its former mineworkers from their homes despite the company failing to pay them owed terminal benefits.

The evictions were temporarily stopped in the run-up to the 2018 elections after Mines Minister Winston Chitando, in a clear case of garnering for votes, told the former workers at a packed Maglas Stadium in Zvishavane during a Zanu PF rally they would be given ownership of the homes.

Scores of families had by then been evicted by the SMM authorities and the Messenger of Court.

However, NewZimbabwe.com has it on good authority, mine security officers Tuesday evicted seven families, while four others were forcibly removed midday Thursday.

The affected families’ properties were dumped at Balmain Shopping Centre along the Masvingo-Zvishavane Highway. The shopping centre is five kilometres away from the Gathsmine township, where the families lived. 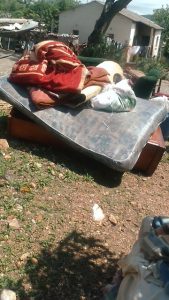 Some of the property of the evicted former SMM Holdings workers

Some of the former workers resisting eviction accuse the mine authorities of acting in bad faith since they had initially agreed to an amicable settlement.

“They offered to settle what they owe us by giving us the houses that we are occupying and some of us even have offer letters. Now, they are offering us houses which are being occupied by other workers and telling us to go and negotiate with the occupants to pave way for us. That is purely an act of madness,” one affected former employee said.

Tafadzwa Mbwachena of Ruvengo Maboke and Company, who is the lawyer for the former workers, declined to comment, saying briefly; “Right now, I cannot comment about the case because it is still before the courts,”

Efforts to also get a comment from Minister Chitando were fruitless as his mobile phone went unanswered up.

However, sources allege the raging war between the two parties has been fuelled by pressure reportedly being exerted by the Great Zimbabwe University (GZU), which is renting some of the SMM’s properties.

SMM is also accusing the former workers of owing the company due to their continuous stay in the company houses.

Evictions, court cases and demonstrations have been the major highlights of one of the raging and longest civil matters in Zimbabwe, which has spanned for almost 18 years.

SMM Holdings, which was majority-owned by businessman Mutumwa Mawere was forfeited by the state under controversial circumstances.

In 2004, the then Justice Minister Patrick Chinamasa invoked the ‘reconstruction law’ which stripped owners and shareholders of companies that owed the state.

Two killed in Mhondoro over Donkeys

Give airplay to Artists outside Harare- Blue challenges radi...

Mnangagwa Tells Bulawayo “My Govt Has A Solution To Your W...

Thigh vendor speaks out after having a steamy s.e.x session ...